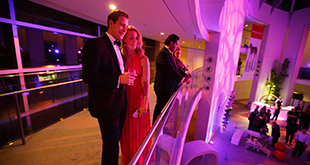 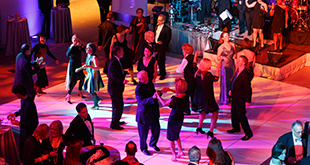 September 5, 2008  |  Press Pass
Boston A Year in the life - A book party for Bill Brett
If you are from Boston, I probably don't need to tell you who Bill Brett is. With a 40 year career as a photographer at the Boston Globe, Brett has become a legend in this tight-knit city. His photographic chronicle of Boston and it's most influential citizens is like no other. Bill Brett has literally seen it all. Last night I attended a party in honor of his new book, Boston A Year in the Life. 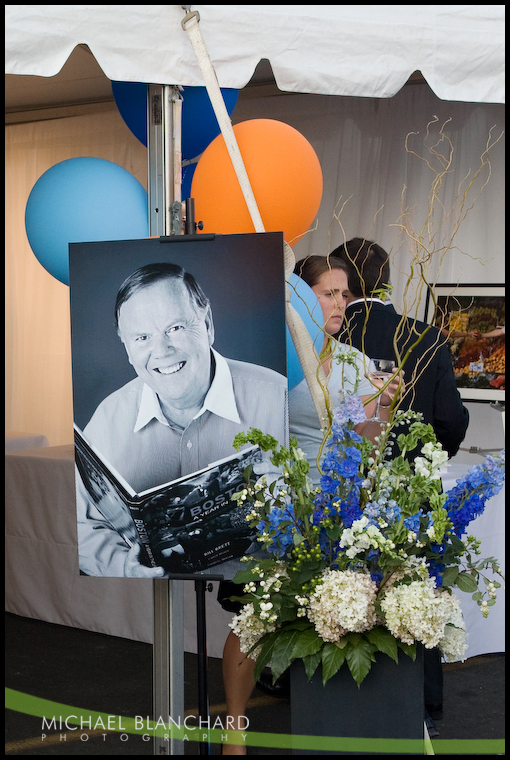 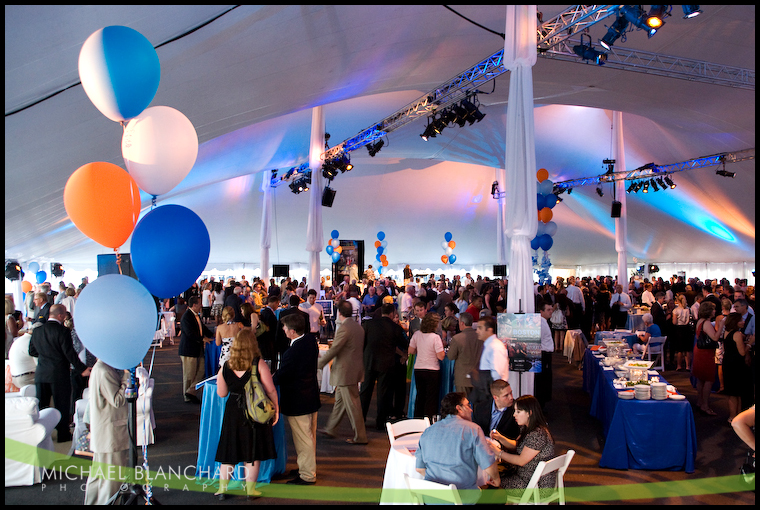 A line of admirers and friends waited as Brett signed every last book. The line extended outside the tent for over three hours.

Carol Beggy (center) is a former colleague of Brett's at the Globe. Beggy wrote the text to the book. 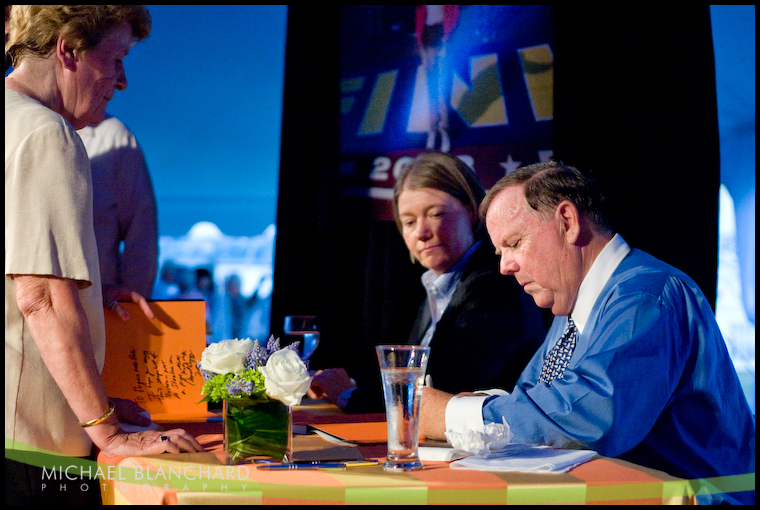 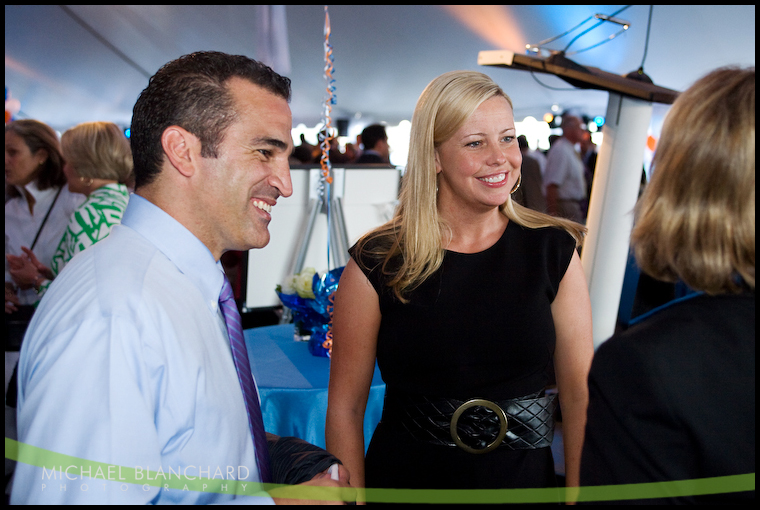 It was a beautiful evening on the waterfront. 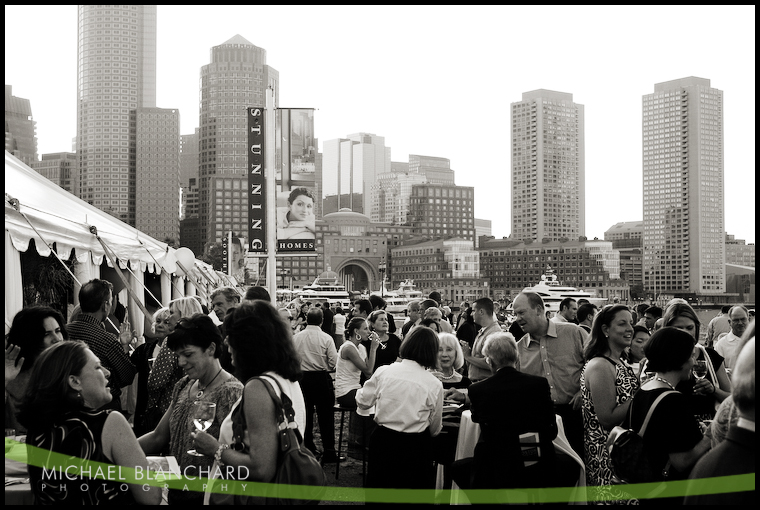 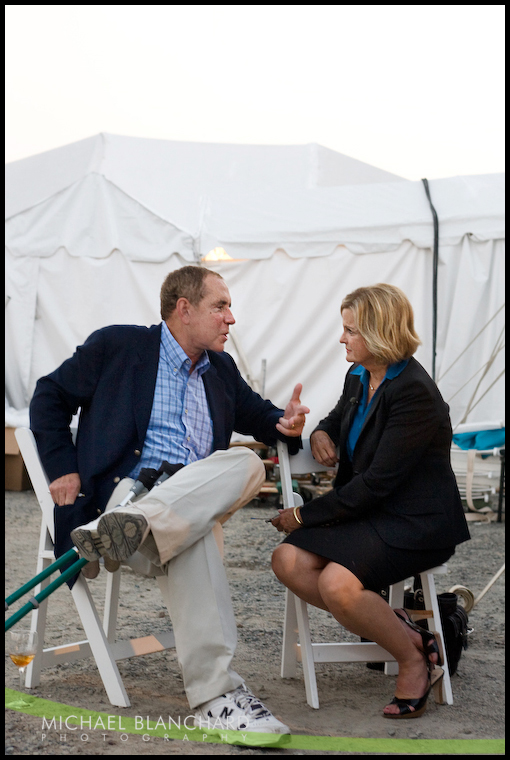 While the Drop Kick Murphy's played inside the tent, a fireboat graced the Waterfront in honor of Brett. 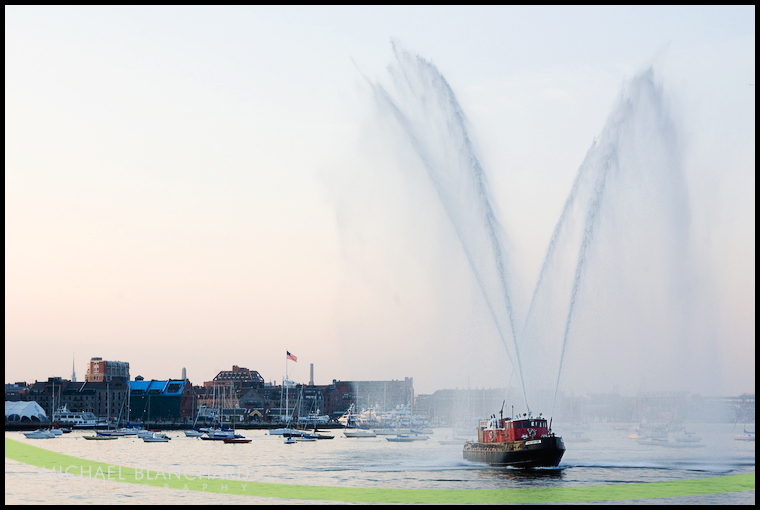 It was quite nice! 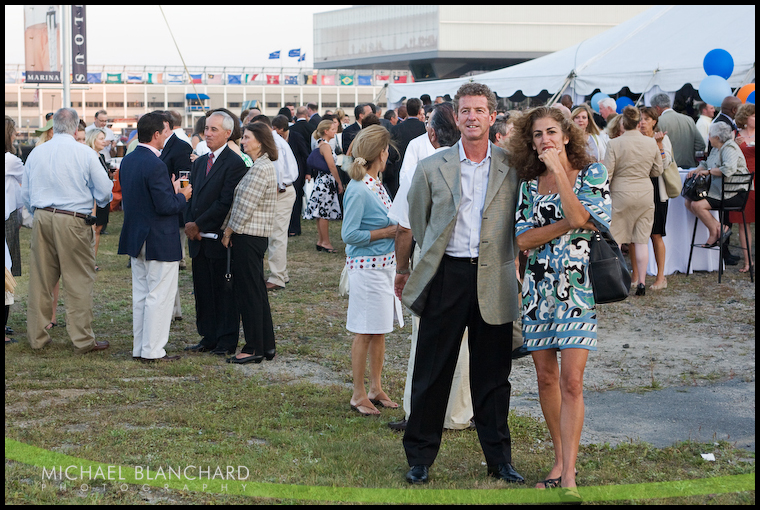 Sally and Terry Kelly of Norwell. 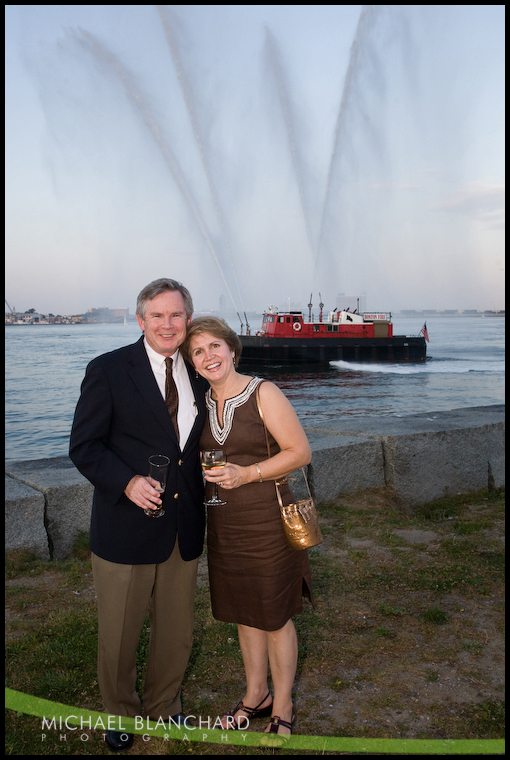 I didn't come to the party to work but people kept posing for me! Perhaps they thought I was filling in for party lines. 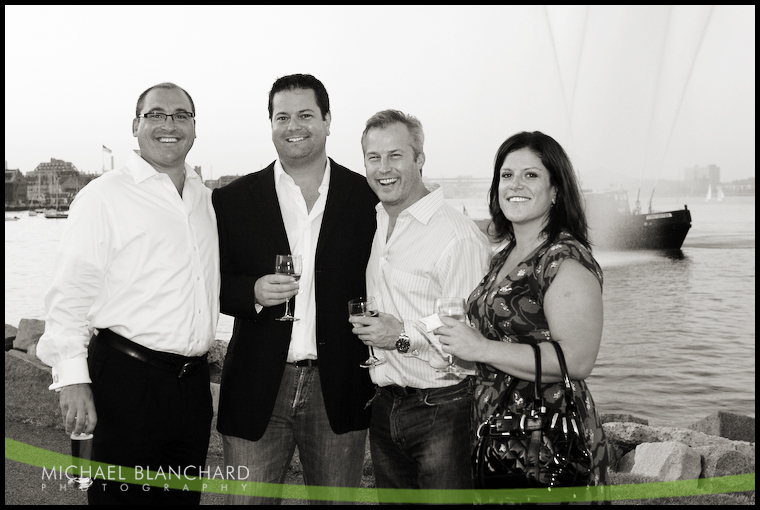 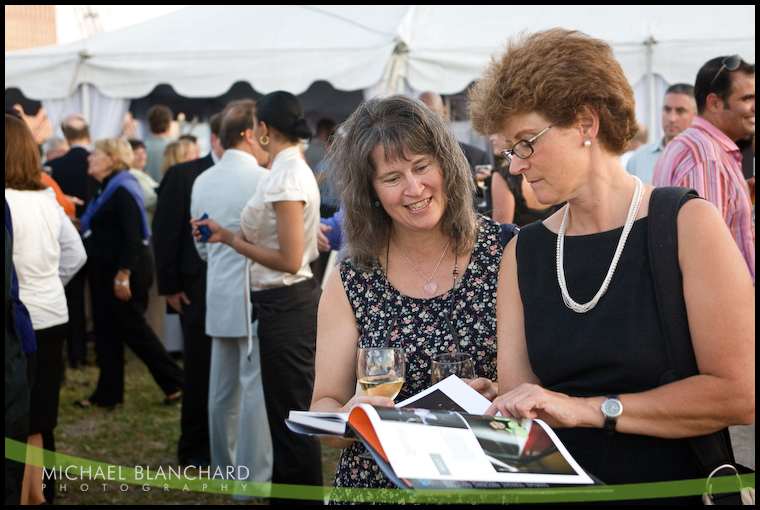 The photo to the right is of Brett at the Boston Marathon finish line, camera in hand!

Boston A Year in the Life took place between the 2007 and 2008 Boston Marathons. One picture, every day in between. 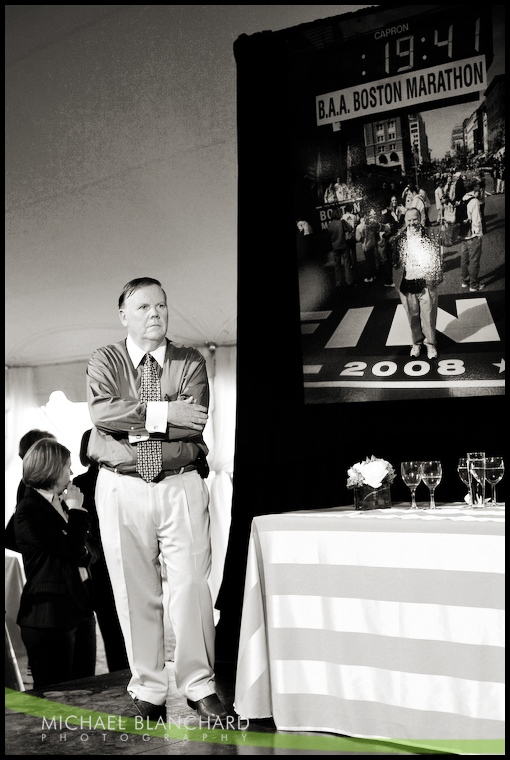 Brett delivered a touching speech about his love for Boston. 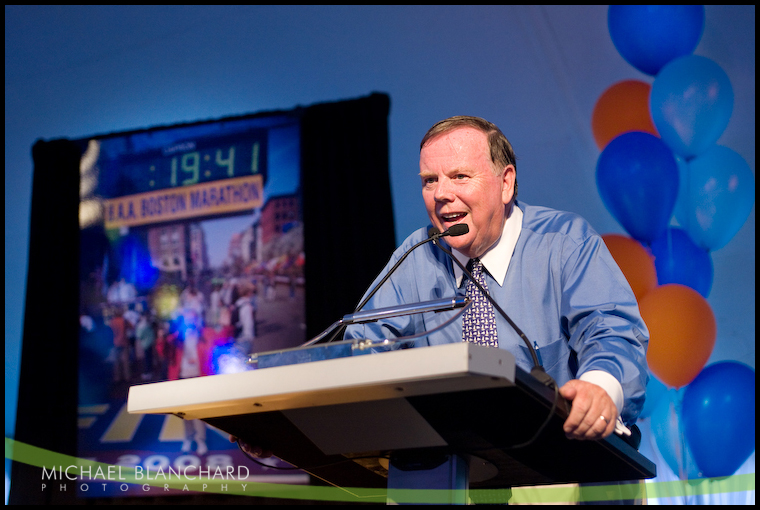 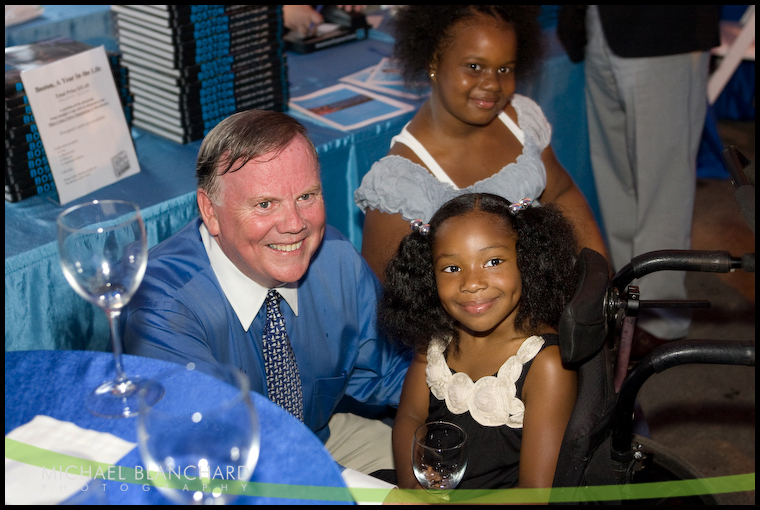 There were signed prints of Brett's photographs being auctioned off the end of the night to benefit Camp Harbor View.

Unfortunately, I was outbid for this photo, taken on July 4th, 2007 of a Sailor saluting the flag. I STILL WANT ONE! 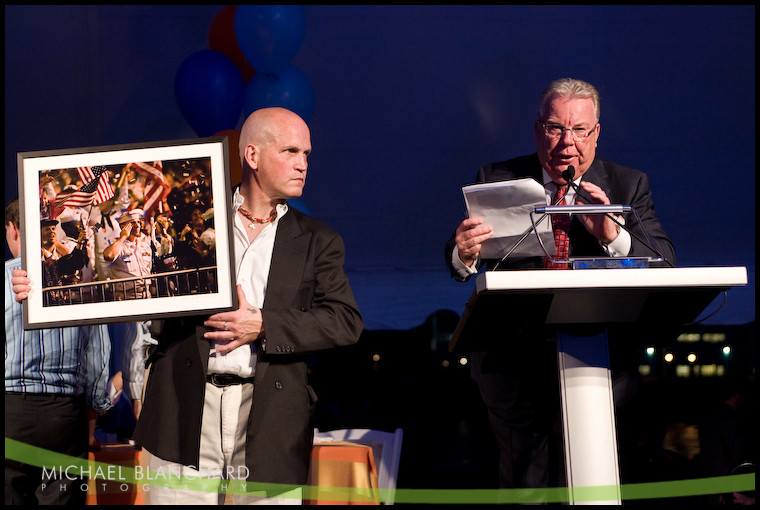 Luckily I was able to win the bid for my second favorite print, the sunset over Boylston St, taken on November 2nd, 2007.

Many thanks to Mark Garfinkel for taking this photo of Bill & I. 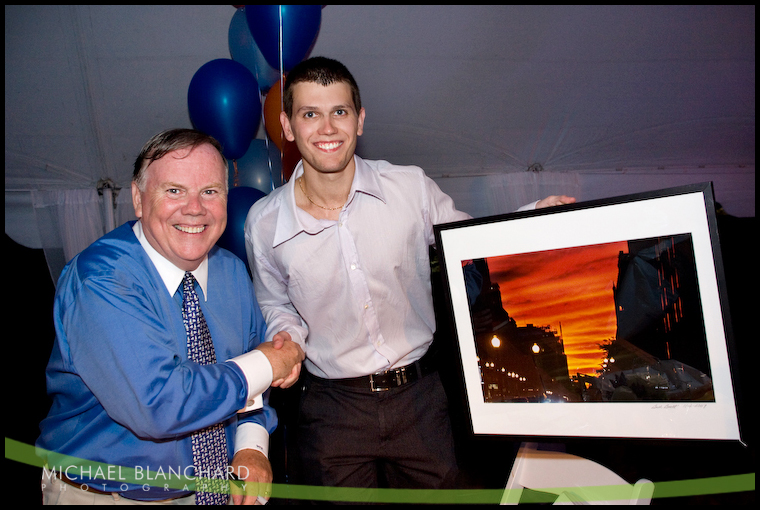 Ever since I first picked up a camera I have always marveled over the work of a Globe photographer named "Bill Brett". Before I even knew his story I made up my mind that this guy had the coolest job in the world. Thanks for being such an inspiration Bill!

Click on the video below to watch a NECN cover story on Boston A Year in the Life.


Still interested? -- Read about Boston A Year in the Life -- See the pictures -- Buy the book.


A special thanks to Carol Beggy for thinking to invite me!